The King is Here, Long Live the King!

Ever since their defeat in the third battle of Panipat in 1761, the Marathas have been a subdued lot. Till then, they had ruled over two thirds of India, and justifiably cocked a snook at the rest of us mere mortals. Panipat changed all that. Their evolution into the docile, unassuming `Marathi manoos’ of Poona’s Peths had truly begun!

Modest, humble and self effacing to a fault, even their food appears to be apologetic. Try feeding their breakfast of `kande pohe’ or `sabudanyachi khichdi’ to a robust North Indian brought up on his `swimming-in-butter’ parathas washed down with gallons of lassi, and the snort of derision will be heard right upto.. well, Panipat!

But come summers, and everything changes. The tigers begin to roar. Modesty is flung aside, and every Maharashtrian thumps his chest in justifiable pride. The king, they tell the world, is here, and guess what, he’s a Maratha! King Alfonso, called `hapus’ locally, is not only the king of mangoes, he’s the President, the Pope, the Caliph all rolled into one – and take that, you non Maharashtrians!! 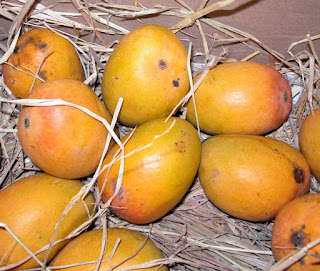 Of course the Alfonso is also grown in the costal districts of Gujarat and Karnataka, but it’s the Ratnagiri and Devgadh/Sindhudurg districts in coastal Maharashtra that give you the sweetest, juiciest variety, and make every Maharashtrian thumb his nose at all the other pretenders.

North India has its langda, chausa and the dussheri, the South has the baiganphali and Neelam, the East has the famed Malda mangoes, while Gujarat’s pride is the flaming orange Kesar.  The Pakistanis swear that the Anwar Ratole is actually the `true king’ – but let’s face it - nothing, just nothing comes even close to the Alfonso. The only carp about the Alfonso that I agree with is that it totally spoils you for any other mango!

Buying your Hapus from the market is a task in itself. First, you must decide whether you would like to pay your rent this month or buy a crate of Hapus. Then there is the matter of making the purchase. If you buy six, two must be ripe (ready to eat in the rickshaw back), two threatening to get there, and two must be mottled with green. You will need to inspect the mangoes, prod them, and then smell them, wrinkling up your nose in distaste for the seller, while trying not to pass out with joy at the divine smell.

If you decide to auction your wife's wedding jewelry and buy a crate of hapus, the raw mangoes must sleep in the hay at the bottom until their older brothers, stacked above them, have gone to the Great Orchard in the Sky.

Aamras, basically mango pulp, and ideally eaten with pooris and dry potato sabzi, is the dish for special occasions in May and June. A Maharashtrian knows that he has truly arrived in the world when the aamras on his family's plates is made entirely from Hapus mangoes and not diluted with a few Payaris.
Of course, the Hapus is best eaten in your underwear. The whole family gathers around the bucket of cool water in which the fruit has been chilled, and then follows the sheer production number that makes the Japanese tea ceremony look like a primary school picnic! The texture of the fruit demands that it be sliced and not sucked like its poorer cousin the Payari. I say hell with the convention, all mangoes deserve to be sucked!

And my technique, derided as `Gross, Pa – GROSS!!’ by my kids is one I shall defend till my dying day. Take a bowl of chilled home made dahi. Add a spoonful of sugar to sweeten it slightly, and beat it to a creamy consistency. Then soften the chilled Alfonso as you would a Payari before sucking it. Then open the top, and squeeze the delicious orange nectar into the dahi. Keep squeezing till the kernel (called `gutli’ in these parts) pops out and plunks into the bowl. Continue squeezing till you’ve extracted the last golden drop. Now discard the skin, pick up the gutli, swirl it around the dahi-mango mixture, and just slurp on it, making a sound that one normally associates with porn movies.. Continue the process till the bowl no longer requires cleaning, and the gutli resembles a parched seed! Truly orgasmic!

Those unfortunate enough to have to ever leave Maharashtra must survive on the pretenders. But as every Maharashtrian knows, if a mango is not Hapus, it might as well be a papaya!