Amrita Pritam (1919 - 2005) was one of the most prominent female writers and poets of our time. She published over seventy books - novels, short stories and poems.

Amrita Pritam was born into a Sikh family of Gujranwala. She was the only child of a school teacher and a poet. Her mother died when she was eleven. Amrita married at the age of 16, and divorced in 1960, at the age of 41. 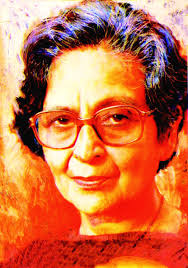 At the time of Partition, in 1947, Amrita migrated to Delhi. After migration, she started writing primarily in Hindi, instead of her native Punjabi. She has authored two autobiographies, titled, `Rasidi Ticket’ and, `Aksharon ke Saaye’. Her novel, `Pinjar’ (Skeleton), about the agonies of Partition riots, was also turned into a movie.

Amrita’s impromptu capturing of the condition of Punjab at the time of partition in her, `Ode to Waris Shah’ makes for compelling reading. Legend has it that Amrita wrote this poem, on her migratory train ride from Gujranwala to Delhi in 1947, deeply moved by the violence she witnessed.

`Ode to Waris Shah’ is a call to the legendary Punjabi poet, Waris Shah (1722 – 1798) whose `Heer' is considered the Bible of Punjabi poetry. It is filled with allusions to Waris Shah’s legendary work. She refers to Heer as the, “daughter of Punjab” (dhii Punjab di), and beseeches Waris Shah to step out of his grave and hear the partition cries of a million Heers. The poem also references many of the main characters of the Heer legend – Ranjha, his brothers, and Qaido (the villainous Uncle), comparing the attitudes of the Punjabis at the time of partition, to the evil acts of later.

My own understanding of pure (`theth’) Punjabi being severely limited, this translation would have been impossible without the inputs from Samina Rizwan, who researched the `Luddan’ reference and came up with a plausible explanation. Also, her brother Umar Rafi who started it all by circulating his own translation, which I have used as a reference point.

AN ODE TO WARIS SHAH – by Amrita Pritam


Waris Shah, I beseech thee, speak up from your grave
To love’s eternal treatise, please add another leaf

A single daughter wept once, you screamed out in protest
Today a million daughters weep and implore you, Waris Shah:

Oh, voice of the anguished Arise, see the plight of your Punjab
The fields are lined with corpses, the Chenab flows red with blood

This fertile land sprouts venom, from each and every pore
The sky has now turned crimson, from all these cries of gore

The very first snake-bite, and the charmer lost his spell
Yet every bite after that addicted them all the more..

The songs have all been silenced, the cotton threads are snapped
The girls have fled the courtyards, the spinning wheels are mute

The wedding beds and the boats have all been cast away
And the Pipal branch, the swing lies broken in disarray

The flute that just knew love, has been forever lost
Even Ranjha’s brethren no longer know this art

It’s blood that’s rained on this earth, seeping through the graves
The damsels that lie within them lie weeping in their shrouds

Today there are just Qaidons, looters of beauty, love
Today, where shall we find another Warish Shah?

Waris Shah, I beseech thee, speak up from your grave
To love’s eternal treatise, please add another leaf