Four Score And Seven Years Ago...

Admittedly, I’m a history buff. So a visit to the United States would have to include (in chronological order) the infamous Boardwalk at Atlantic City, the Liberty Bell and the Independence Hall at Philadelphia, the Ford’s Theatre at Washington DC, and the notorious Federal Penitentiary at Alcatraz, off San Francisco.

Also, as a fauji, the not to be missed sites included the battlefield (now a Military Park and Museum) at Gettysburg, the Arlington National Cemetery at Washington, and the 9/11 Memorial at New York. 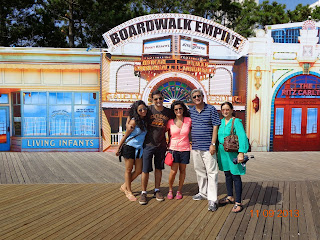 If you’ve been following the enthralling HBO series `Boardwalk Empire’ as I have, you’ll no doubt understand my keenness to do a Nucky Thompson. In the 1920’s, America, in what proved to be an asinine move, imposed prohibition across the country. This was the genesis of the bootlegging and organised crime empire that sprung up at Atlantic City and Chicago respectively. Enoch Johnson, Al Capone and J Edgar Hoover became household names as they chased each other across the country in an internecine warfare that has been breathtakingly captured in the serial. 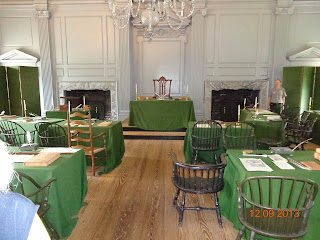 The tale of the Founding Fathers, the debates leading to the Declaration of Independence in 1776 (not on 4th July as believed, but sometime in August), the ringing of the Liberty Bell at the then capital of the fledgling nation – Philadelphia. We stood in silence in the very room in which Washington, Jefferson, Adams and Franklin had solemnly debated upon, and finally signed a document that was to define democracy across the globe for centuries to come. (PS - Of course, we also demolished the reputed Philadelphia cheese steak at `Jim’s’ – altogether an unforgettable experience – but of my culinary adventures, wait for another post!)

As a schoolboy, I had had to mug up Lincoln’s Gettysburg Address by heart – every comma and full stop in place. To my credit, I still remember most of it. If I’m still around, I plan to make my grand children do the same – even if it totally demolishes Lincoln’s claim that `the world will little note, nor long remember what we say here…’ 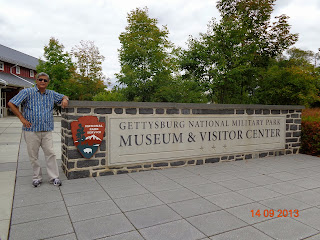 As battles go, Gettysburg may not have turned the tide of the American Civil War (the war continued for a full two years after Gettysburg), but it was definitely a defining moment for the Union, and will forever remain the site where Lincoln articulated what are arguably the most beautiful 272 words of prose ever written.

Of all the characters of history, the one who I grew up admiring the most was Abraham Lincoln. Had he survived to complete his second term, America would have been a different country today. As I gazed at the spot where he had been shot at Ford’s Theatre, then walked across the road to the room where he had breathed his last, I was overcome with a sense of grief, and madness at the way crazed people try and change the course of history through violence.

Arlington provided a sombre reminder of the same sentiment. Kennedy, who had visited the spot just two weeks before Dallas, now lay there forever stilled. Rows upon rows of marble gravestones, from the Great Wars to Afghanistan - such needless deaths! 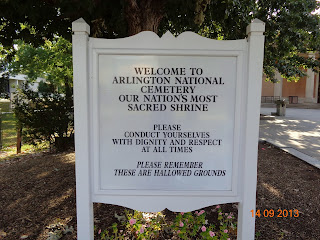 Arlington became a tourist attraction only after JFK was interred there. But apart from the `celebrities' who lie in repose in those hallowed grounds - I noticed Joe Louis (the Brown Bomber) and Audie Murphy (`To Hell and Back'), among others - the most poignant and for me the most significant, remained the Tomb of the Unknown Soldier.  The solemnity of the Changing of the Guard (only clicking of the heels, no banging of the feet, and the slow march) brought tears to my eyes.

Of course I can never mention Arlington without adding as an aside the American journalist’s description of Islamabad, Pakistan as `half the size of Arlington National Cemetery, and twice as dead!’

New York, of course, cannot – and must not – be seen in the two days that we had at our disposal. The `touristy’ stuff like the Empire State Building, the Statue of Liberty, Times Square and of course hot dogs from the redi-wallahs at Manhattan were quickly disposed off. Then came the 9/11 Memorial. 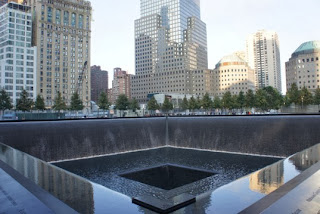 The footprints of the two towers have been converted into breath-takingly beautiful `reflecting pools’. The names of all who perished have been engraved on the walls, and a rose is placed thereon on their birthdays. Surrounded by the tall sky scrapers of Manhattan, this is now an island of tranquility.

But I was in no mood for sombre reflection. The deep sense of outrage at the perpetrators was overwhelming. To date, I feel the most fitting memorial to the 3000 people who perished in that attack would have been to re-build the towers post haste.

A female guard at the Memorial shared my frustration, as we spoke wistfully into the setting sun. Will they not come here and gloat, I asked her? Is this not so much a memorial, as an abject surrender? Did they actually consider building a mosque at the site, to rub salt in the wounds of the victims? Well, we did get him in the end, she sighed, more in resignation than any rancour.

Apparently, the families of the victims wanted the ground to be left intact, and a Memorial built. The new World Trade Centre, with seven buildings is coming up around the Memorial – the first building is already up, and stands taller than the Empire State Building. It’s the swankiest structure in New York, I agree – and even though OBL is now feeding fish in the Atlantic, it did little to diminish my anger.

It’s a tribute to the resilience of New York, she said. That’s what gets me – the resilience is better shown by teaching them a lesson, not by quickly getting back to your way of life. Turning the other cheek is NOT an option in my book!

Sadly, as Maxim Gorky said, “Man has learnt to swim like a fish, to fly like a bird, but has still not learnt how to walk on earth like a man!”