Spoiler Alert. If you have little or no interest in field hockey – yes, it IS our national game – then this post is not for you. Am tempted to throw in a few expletives here, but hell, to each his own, I guess.

Me and my son Sid, we’ve always been great sports buffs. Even as a toddler playing `gully’ football, he’d name himself Platini or Cruyff (Pele was far too common for his esoteric tastes), much to the surprise of my fellow officers. Of course I was proud!

At the first match of the Champions Trophy, he ran into Dilip Tirkey during the half time break.

“You recognised him?” I asked incredulously. “Of course!” he replied, “I even clicked a selfie with him!” I was delighted!

But wait. I’m getting ahead of myself.

Field hockey, our national sport, was for years, the only medal hope for India at the Olympics. Between 1928 to 1964, we won 7 of the 8 Gold Medals on offer, losing only in 1960 to Pakistan. Who can forget the 1964 Tokyo Olympics, where we beat Pakistan by a solitary goal scored by Mohinder Lal. Pakistan piled on the pressure, but the great Shankar Laxman in goal stood like a rock. Incidentally, other than Lal and Laxman, all the remaining nine players of that team were sardars! 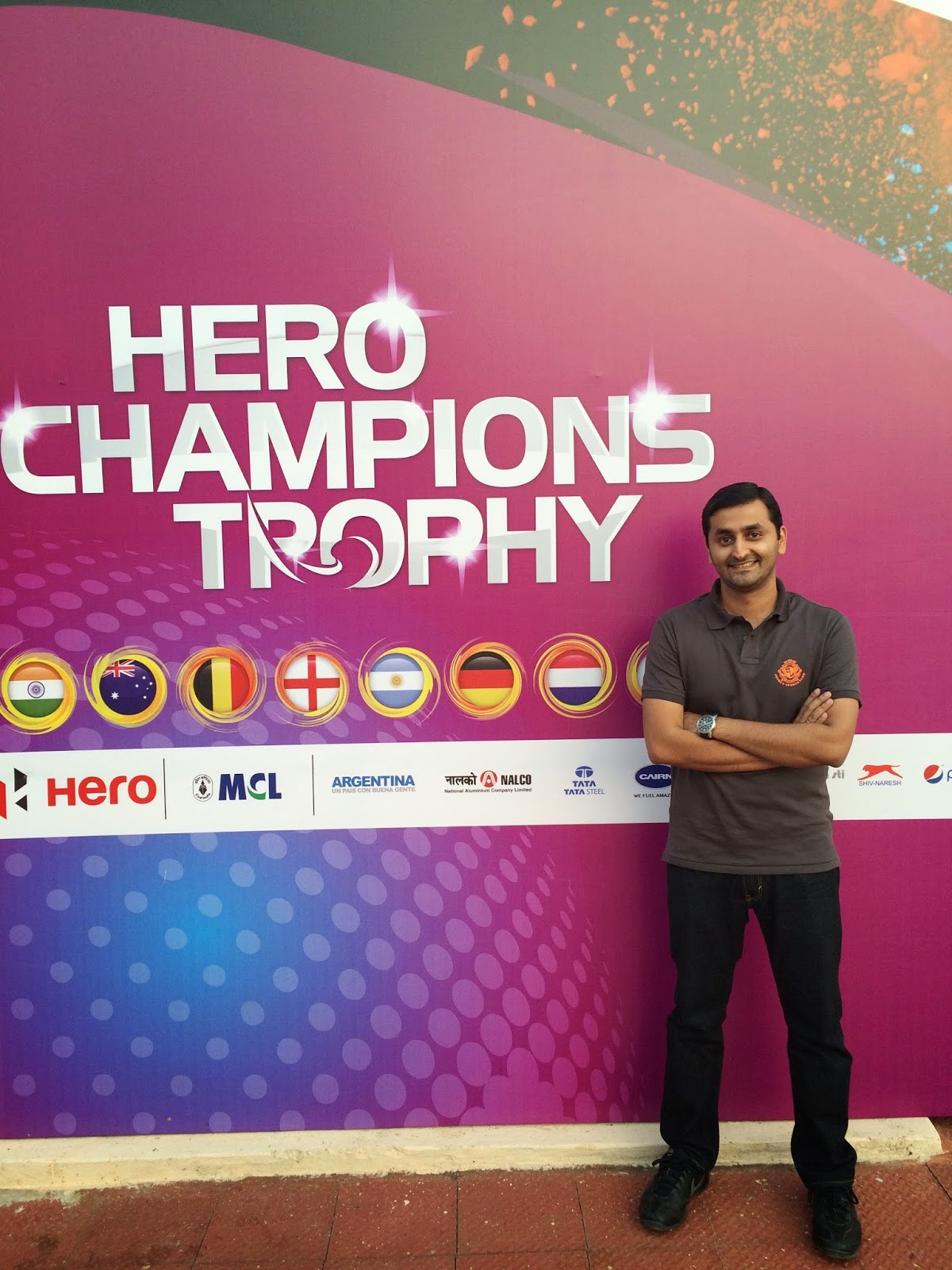 India was to host the 2014 edition of the tournament at the newly built Kalinga Stadium at Bhubaneswar. Since Bhubaneswar happens to be my sasural, I grabbed the opportunity. Sid and I decided to witness all the matches.

We managed VIP passes, courtesy my wife’s nephew, and were all set.

The eight teams were split into two pools of four teams each – Pool A had Australia, England, Belgium and Pakistan, while Pool B featured Holland, Germany, Argentina and hosts India.

The tournament draw was a bit odd. All 8 teams were already assured places in the Quarter Finals – the pool matches were only to decide the placings, ie who would meet whom in the Quarters.

Strange as it may seem, the two teams who finished at the bottom of their pools, ie Pakistan and Germany, were the ones who met in the finals! Naturally, there was a huge criticism of how the whole tournament had been drawn up, as teams received no benefits from the points earned in the league phase!

Other than India, Pakistan was the team that was cheered most – when browns play goras, we brownies tend to team up!

While the non-India matches were thinly attended, the stadium was packed whenever India took the field. To hear the 7000 crowd sing the national anthem in tandem with the 15 players lined up in the India blues behind the tricolour is enough to give anyone goose bumps!

India were to meet Pakistan in the semis. We reached the stadium two hours in advance, as there wasn’t an inch of space available anywhere. As the Pakistani greenshirts entered the stadium, there was a huge round of applause, only out decibeled by the roar that went up when Sardar and his boys entered, in their traditional sky blue jerseys.


Watching an India Pakistan hockey match in a jam packed stadium should be on everyone’s bucket list. Sid and I had managed to interact with both teams at their hotels the previous day, and were licking our lips in anticipation.

It was a nail biter. We scored first, they equalised. Then they took the lead twice, we equalised twice. Then, in the last quarter, we did everything but score. Then, to our horror, and totally against the run of play, they scored with barely a minute to go. The stadium went into a stunned silence. The final hooter sounded. We had lost 3-4!

The Pakistani players were understandably jubilant. But what they did next shocked us to the core. While two of them fell to their knees in prayer, the others went berserk. Ripping off their shirts, they screamed obscenities at the crowd, showing middle fingers, and gesticulating as if to say `Ab kyun chup ho gaye?’

In a word, it was disgusting. Shahnaz Sheikh, their coach, had to run onto the field to curb them. He even slapped an over enthusiastic Amjad Ali who was doing something unmentionable.

What a contrast to the last India Pakistan match I had witnessed at Bombay in 1976. Then, the Pakistan captain Islauddin had won 60 thousand Indian hearts when he and the team threw rose petals into the stands! Nobody, just nobody had grudged them their 1-0 victory over Bhaskaran’s Indians that day!

“Pa” said Sid to me as we wound our way out of the stadium “I was all set to root for Pakistan in the finals. Not any more!” he shook his head in disbelief.

In the finals that followed, so roundly were the Pakistanis booed, and so heartily did the crowd back Germany, the Germans felt they were playing in Munich rather than Bhubaneswar.

That nasty bit apart, we had witnessed a great tournament, seen some terrific hockey, met some of the greats of the game, and came away totally satiated!

The 2018 World Cup, with 16 teams, is once again scheduled to be held In India. At the very same Kalinga Stadium at Bhubaneswar. Will we be there? Insha Allah!!

Hockey rules! Give me Sardar Singh over Dhoni, anyday…