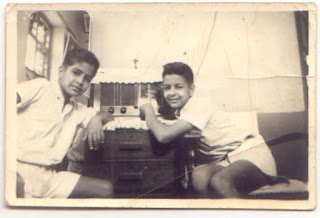 As I mentioned, as kids we started off without even a radio at home. Just to listen to cricket commentary, I had to trudge to my neighbour’s house! Which reminds me, shouldn’t Anant Setalvad, the greatest radio commentator EVER be on this list too (does ANYONE know if he is still around?). When my sister Prem bought a second hand Pye valve radio that had clearly seen better days (see pic), what a quantum jump that was for us – running home from school or games just to listen to Radio Ceylon!

And to the man with the golden voice, the voice that single handedly made Binaca the single largest selling toothpaste in the country. The man who, long before our TV mythologicals, made India come to a stand still every Wenesday at 8 pm. Long before the mindless countdowns of MTV and V, he taught us about `payadaans’ and `sartaaj geet’.  You only have to listen to the non-stop and utterly banal yak-yak of the present day RJs on FM to realise just how great Ameen Sayani was! Thankfully, he is still among us, and there’s hope yet that I can meet him and shake his hand, and tell him just how much the erstwhile Radio Ceylon, and all his listeners owe him. 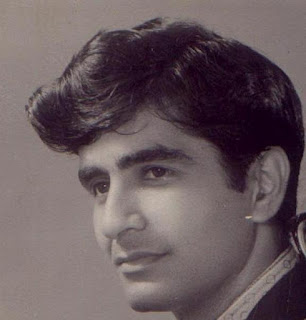 In school, we were clearly divided into the Dilip-Raj-Dev camps, and loyalties were fierce. For me, it was a no brainer – the casually coiffured puff, which one spent hours and hours trying to ape (the  pic says it all), the outrageous gait, the staccato dialogue delivery – it was Dev Anand all the way!

One of my first published pieces was a letter to the `Illustrated Weekly of India’ castigating RK Narayan for criticising Dev Anand’s version of `Guide’. Narayan’s article had the movie stills plastered all over the page, under the caption `Is THIS Malgudi?’. I responded with all the passion of a 17 year old, saying : You ought to THANK Mr Dev Anand, sir – for who knew RK Narayan before the movie was released??

I unabashedly aped Dev's dress sense, even getting a pair of ORANGE trousers made that he wore with such aplomb in `Johnny Mera Naam’!

Sadly, I also saw Dev Anand slide into senility – If I rate Guide as one of the best I’ve seen (lost count of the number of times I saw it, and I still know ALL the dialogues by heart), I also rate `Swami Dada’ among the worst. After that, I just gave up on him, preferring to remember the jaunty, angular run down the hills of Conoor, warbling in Rafi’s voice “Khoya khoya chaand..”.
Posted by Harish Puri at 07:06