Puja and her Bollywood blues!

I guess the fault is really mine. She was barely a few months old when we took her to see her first movie. In the crisp Delhi winters of 1976, we wrapped her up in a blanket, and trooped off to the open air theatre at Delhi Cantt’s Vaughn Club (is it still around, anyone?). Where we screwed up big time was in the choice of movie. Well, there wasn’t any choice really, only the biggest duds from Bollywood found their way to the club. This time it was `Kehte hain mujh ko Raja’ with Biswajeet in a double role, AND directing the movie!

Now Biswajeet, poor guy could barely ham a single role effectively – this was an unmitigated disaster! An aside here. I ran into Biswajeet at Delhi airport a few years ago, and like me he was sporting Aviator dark glasses. However, unlike me, he had lost almost all his hair, and was tad shorter, and more fragile. I pointed him out to the youngsters who were with me, and they were understandably sceptical that this frail guy had once been a matinee idol. “Sir, you look much better!” they assured me – but that was only because Appraisal season was just around the corner.

But back to the Vaughn Club. The attraction of fauji open air theatres is the charm of watching Mumtaz do her thing while you sipped your rum and coke (yes, one hadn’t migrated to whisky by then). But my little daughter, all of four months old, all wrapped up in her blanket didn’t take her eyes off the screen even for a second. If some `uncle’ or `aunty’ crossed her path and blocked her view, she’d let out a wail they could hear in Ambala! Otherwise for the two and a half hours, she was quiet as a mouse, feed forgotten, soother discarded, as she gazed at the two Biswajeets in rapt and adoring attention! 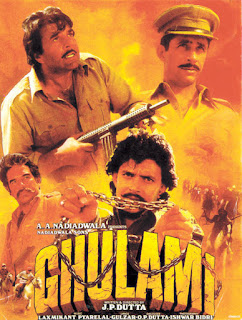 Fast forward to Jhansi, 1984. The Los Angeles Olympics coincided with the setting up of a Doordarshan station at Jhansi fort. Colour TV (Konark Rainbow Deluxe, with a Grundig kit), and the VCR (National Panasonic G-12) invaded our lives, and what a world they opened up! The only VHS tapes we had were `Ghulami’ and `Batwara’. My daughter, who was around 8 years by now, soon knew both the movies by heart! Today, in 2012, she STILL quotes from these movies – when her hubby demanded only mineral water at a restaurant, she did her best Dimple Kapadia imitation “Pani toh pani hovay hai thakur saab!”. 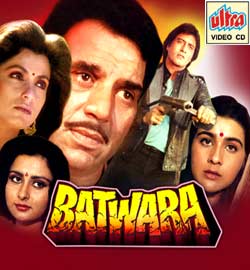 Puja has inherited this trait from my mother, who could (and DID) watch `Nagmani’ more frequently than I care to remember, without letting us fast forward even the ads! My lasting regret is that my mom didn’t live long enough to see my state-of-the-art home theatre – but I guess she lives in my daughter who, at any given time, accompanies her `doing her nails’ to the re-screening of Hindi movies of the 70’s and 80’s. Absolute low brow stuff like `Ghar Sansar’, `Naseeb Apna Apna’ and the like.

“Don’t blame me, she says – you started me off with Kehte hain mujh ko Raja!” Why, oh why didn’t I take her for `Lawrence of Arabia’ instead??

And Mummy, was this the ONLY trait you could have gifted your grand daughter? Come to think of it, she also gifted her an extremely nervous (am being kind here) digestive system – lekin woh kissa phir kabhi!!