Circa 1974. I was a subaltern, with barely a few months unit service, posted at Delhi Cantt. The Defence Minister was to visit a few station units, and a `Coordinating Conference’ had been called at Area HQ. About a dozen or so officers sat around the Conference Table, freshly sharpened pencils poised over scratch pads, looking appropriately solemn.

Being a subaltern and, therefore, to be only seen and not heard, I tried to slink into my chair and appear invisible. Two years at the IMA had made me a self confessed expert at appearing raptly attentive, even while flitting in and out of a day dreaming haze.

Mentally, I was already at `The Cellar’ disco at Connaught Place (how many of you Delhi-ites remember the joint?), jiving away the collective blues of a subaltern posted to the nation’s capital.

Suddenly, I felt a jab in my midriff. Apparently, I had been caught napping. Years of experience had taught me that the best way to get out of such a fix was to stand up confidently and ask a question, thereby implying that one was very much `with it’.

The problem was that I hadn’t the faintest idea of what the current discussion was about. Having vaguely heard the acronym `RM’ being bandied about, I decided I was on firm ground. RM, I knew stood for Radio Mechanic, and since that was a Signals trade, it was right up my alley.

“Sir,” I began expansively, “About this RM. Am I required to depute him from my unit, or will Delhi Area Signal Company handle it?”

There was pin drop silence. Apparently, the RM they had been referring to was `Raksha Mantri’ or Defence Minister! The silence was broken by loud guffaws. Among the twenty seven thousand six hundred and seventy three times (give or take) that I’ve made an ass of myself in life, this one rates pretty high!

Luckily for me, General Eustace D’Souza of the Maratha Light Infantry, the then GOC Delhi Area, was endowed with a keen sense of humour, so I got off with little apart from the egg on my face.

“Why the @&*$ would anyone say `Raksha Mantri’ and not `Defence Minister’ when talking in Queen’s English?” I muttered under my breath.

An aside here. Another encounter I had with Gen D’Souza bears recounting .

I received a mail from Area HQ, asking me to explain the circumstances under which one of my Signalmen had contacted malaria. I was flummoxed. Everyone knows how one contacts malaria, I reasoned, so why on earth was I being asked to explain the etiology of the disease to Area HQ?

Of course I learned later that the Army considers the contacting of malaria a cognizable offence. The logic being that malaria could be prevented through the simple expedient of rolling down one’s sleeves at sundown, and/or dowsing the oneself with a smelly and foul concoction called`DMP Oil’. So if you got malaria, you hadn’t taken due care, ergo you were to blame!

That wisdom, of course, came much later. My reply to the Area HQ was a terse `The exact circumstances under which No so-and-so Signalman Deepa contacted malaria cannot be ascertained. However, it is presumed he was bitten by a female anopheles mosquito!’ There, I told myself, that should show them!

It was only Gen D’Souza’s sense of humour and amiable nature that let me get away with that one!

But back to my language problem. Somebody the other day said he was impressed at the Rashtrapati’s address to the joint houses of Parliament. To my mind, this – like the `Raksha Mantri’ of 1974, was not only incorrect syntax, but sounded extremely silly!

It was Shobhaa De who started this obnoxious practice at Stardust by giving stars vernacular sobriquets – Yogita Bali, I remember, was called `asli ghee’, and so on. 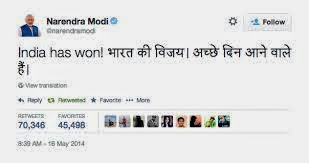 Prime Minister Modi has now stirred a hornet’s nest by asking his ministers and bureaucrats to tweet in Hindi. That is fine with me. One can either say `Rashtrapati ka desh ke naam sandesh’ or `President’s address to the nation’ – but, like the East and the West, the twain shouldn’t  ever meet!

No idea what we are in for, lingo wise. Meanwhile, I’m brushing up my Hindi, and should the Thackeray’s star be on the rise, improving one’s Marathi may not be such a bad idea too!